HAS NEVER BEEN THIS MUCH FUN

The Climate and Sport Initiative is bringing star athletes, sports enthusiasts, and sustainability experts together to take on the greatest opponent of our time. Play hockey, win prizes, and meet top players, while protecting your community for future generations. Let’s stick it to climate change! 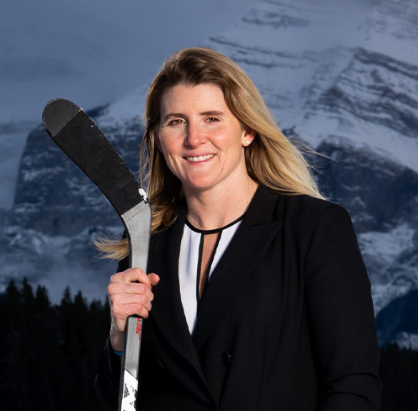 Seven World Championships; six Olympic appearances; five Olympic medals; four Olympic Gold medals—Hayley Wickenheiser is a titan of sport and a leader both on and off the ice.

Most recently recognized by her peers through an induction into the Hockey Hall of Fame, her hockey IQ is highly respected in all areas of the game. She has played in or coached at four NHL development camps with the Philadelphia Flyers, the Edmonton Oilers and the Toronto Maple Leafs—the first woman in history to have done so. She also still holds the record for the most assists, points and goals for the Canadian Women’s National team.

Hayley joined the Canadian National Women’s Team at just 15 years old and had a career spanning 23 years, retiring in 2017 to begin her pursuit of a career in medicine, which she is currently studying at the University of Calgary. She is a member of the Order of Canada, a member of the IOC Athlete’s Commission, Founder of The Canadian Tire Wickenheiser World Female Hockey Festival, the Vice Chair of the Calgary 2026 Bid Committee and most importantly, a mom to her grown son Noah.

Be the first to know about new events and activities!